Ring Shopping 101: Should You Do It Together?

Shopping for rings is interesting in that it’s arguably the only major monetary commitment where it’s socially acceptable to not consult your partner. It’s entirely possible to spend a used car’s worth of dollar bills on a ring, and yet it’d look much worse if you bought that car on your own instead. Now, there’s a good argument for ring shopping solo, to be sure, but you want to make sure you both are on the same page no matter how you go about it.

There are plenty of good points to each side of the argument, so let’s get into a good ol’ pros and cons list.

Maybe you want matching rings. Maybe you want something specific, but you still want to match. If you’re looking for unique wedding bands for couples, this can be an efficient way to do so. Really, if you’re going for a matching set, it’s just easier to shop together and may lead to less stress overall.

Con: Not Nearly as Romantic

Look, a lifelong commitment is as romantic as it gets to be sure. Here’s the issue, though: one of the peak romantic moments of your whole relationship is the proposal. If you let your fiancé look behind the curtain, it turns out that Oz, the Great and Powerful, doesn’t have the same luster. There’s passion and romance involved in the proposal, and it’s a major touchpoint in all marriages, but ring shopping can take the magic out of it a bit. You could propose without the ring (or with a stand-in) and then go shopping after to combat this issue though.

Buying a ring can be a serious source of monetary stress. This is doubly so if you have different relationships to money. Say that you’re a spender, but your fiancé is a saver. Debt isn’t an ideal way to start off your marriage regardless, but especially if you aren’t on the same page about it. If you’re comfortable paying off a ring over a number of years, but your fiancé isn’t, ring shopping together can solve that problem before it starts.

Think about it. You’ve got your eyes on a certain ring (read: a certain price range) and your fiancé goes, “Ooh, what about the one that has more diamonds than a 2004 Patriots Super Bowl Ring?” What are you going to say? “No, we can’t afford that.” Is that what you’re going to tell your fiancé, who’s got her heart set on that ring? If so, kudos to you, and you don’t need to worry. Congrats on being fiscally responsible. If that isn’t you, though, just know you could be putting yourself in a precarious position.

Imagine picking out a ring you think is perfect and presenting it as you propose, only to later find out that your fiancé really doesn’t dig the look of it. That would be crushing. Potentially also quite expensive because now you have to buy another ring. It isn’t as romantic, sure, but you definitely avoid any disappointment from all parties involved.

We’re not trying to make ring salesmen out to be used car salesmen. Realistically though, especially if you’re across the counter from someone less than ethical, this is immediately an area where you’re losing.

Think about it. If you were a shady ring salesman trying to make a buck, wouldn’t you pressure you with the, “Don’t you want your wife to have the most beautiful (read: expensive) ring around?” Hell yeah, you would – especially if she’s standing right there. This isn’t as big of a deal if you’re going with someone reputable, but it’s something to think about. 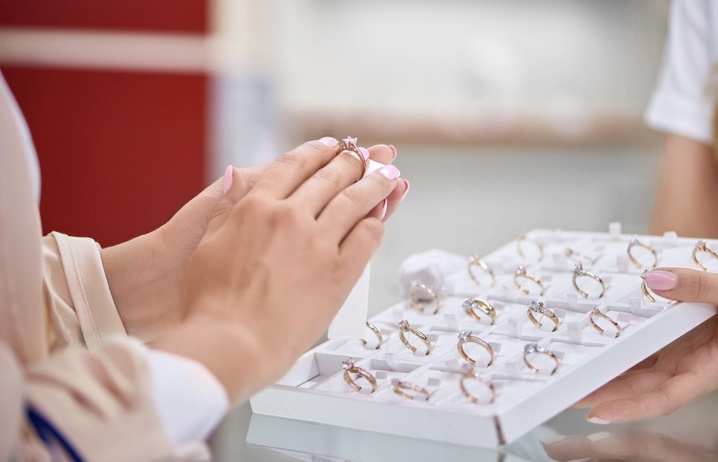 Pro: Score One for Partnerships

Marriage norms are changing. Couples are more partner-like than ever when it comes to wedding finances, and a ring is a big part of that. Similar to being on the same page monetarily, offering to ring shop with your fiancé can just be a show of respect for their taste and economic judgment.

Con: Maybe Only One of You Wants to

This is sort of an adjacent issue, but still a pertinent one. If you want to and your fiancé doesn’t, or vice versa, this can be a source of contention. If you trust you can handle that disagreement should it happen, then you probably don’t need to worry here.

Pro: You Can Open Your Options

Maybe your fiancé is more familiar with local jewelers than you are. Maybe you’re more adept in the world of online shopping for men’s wedding bands. Two heads are better than one, and you’ll cover a broader range of options giving you more chances to find that perfect wedding ring.

Ultimately, it just boils down to what’s best for you two. There’s no universally correct answer. Weigh the pros and cons, make an informed adult decision and you’ll be fine.